After deciding late Saturday to actually participate in the GameJam, I've made something that is barely playable. It is a remake of the cemetery scene from "The Good, The Bad and The Ugly". 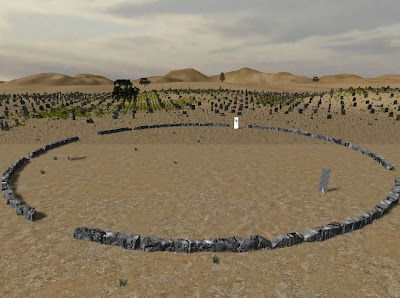 The cemetery is procedurally generated, and contains 74 different tomb stones, in various stages of disrepair, and they're all normal mapped. THere are about 5000 tombstones in total.

In contrast to the detail on the stones, the characters are cardboard props, with some textures splatted on the front. At the end of the tension building glances and facial close ups, you get to spend one bullet on your choice of the bad guys. If you manage to hit the cardboard cutout, you are rewarded with an end sequence and victory scene.

I used Unity3D, made all the models and textures myself, however I borrowed the original soundtrack from the film. I think I'm allowed to do this, as the game is effectively a satire or parody of the original. :-)
Posted by Simon Wittber at Monday, February 01, 2010