Unity Technologies have been kind enough to publish the hardware statistics gathered by their web player.

There is some suprising information in there.

This kind of information is _invaluable_ for independent game devs.

Thanks for the stats UT!
Posted by Simon Wittber at Sunday, September 14, 2008 1 comment:

Uhoh... there goes my productivity! 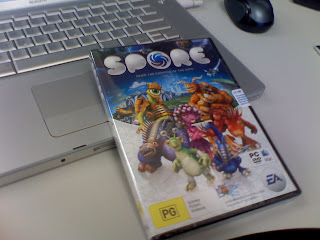 Google will own the web.

Google have finally announced they are releasing a browser. After years of speculation, it is here.

Unfortunately, I'll have to wait some time before I can check it out:

I've been using a Macbook Pro 15 inch for that last few months while I procrastinated about calling Dell to get the XPS repaired. I also need the MBP for Unity and other graphical work.

I have to say, going back the XPS (with Ubuntu) is like a breath of fresh air. It's nicer to type on, has page up page down keys, a brighter screen. Using Ubuntu also feels much cleaner. I can't explain "cleaner", but it just feels that way compared to OS X. I know I can run Ubuntu on the MBP, but I thought I should give OSX a fair go. I'm pretty sure that I'll start using Ubuntu again for web and server code development, and leave the MBP for Unity and other graphical work.

It's really hard to get used to two different laptop keyboards though. :-)
Posted by Simon Wittber at Monday, September 01, 2008 2 comments: