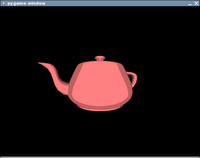 Thanks to some enlightenment from Alex Holkner (GLSLExample on the pygame cookbook), QGL now has shader support that actually works. The attached screen shot shows a Toon Shader in action.

A QGL shader has an update method, which passes named arguments to the shader program. Currently, the only supported data type for update operations is the humble float. Vector and matrix data types are coming soon.
Posted by Simon Wittber at Monday, August 21, 2006

This is cool and all, but I'm concerned about QGL being a single-user library for the next pyweek. There's a lot of functionality going in and there's only a week and half to go before the challenge starts...

duh, I just noticed the bit you wrote in the most recent post about "won't be available until after pyweek". sorry to have bothered you :)

No problem at all! I've been itchin to release this shader stuff... but I thought to myself, 'Richard might not be too happy about this...' so I decided to hold off for a little while.

I've found that Pyweek is very helpful to me, it keeps me motivated, inspired, and adds a little spark to my development every 4 months or so..