Current best practice revolves around using the stencil buffer and projecting a flattened model onto surrounding geometry, creating the illusion of a shadow. The technique often referred to as a shadow volume algorithm.

A different algorithm, with different tradeoffs, is the shadow mapping algorithm. There is even hardware support available for implementing this technique.

I'd like to implement shadow mapping in QGL, as it is likely to be much faster than a shadow volume technique. To do this, I need to get a hold of the ARB_shadow extension, which PyOpenGL doesn't (yet?) provide. I'll probably have to use ctypes, and talk to the libGL dll directly.
Posted by Simon Wittber at Sunday, September 24, 2006 1 comment:

The particle emitter leaf node generates a bunch of particles within an arc and with a velocity range. You then call the .tick method of the ParticleEmitter, which animates the particles. It uses numpy, so it's reasonably fast. It could use a few more features, but I'll need to use it for a while to find out what they might be. :-)
Posted by Simon Wittber at Thursday, September 21, 2006 No comments:

One idea I'm considering is the use of a Linda style system which is designed to provide a tuple-space on a local machine only. For performance reasons, access to the tuple-space would need to be implemented via some kind of shared memory facility.

The tuple-space approach could be ideal for game development processes. For example, the main process could push scene information into the tuple-space, where it is read by a second process which performs culling operations on the scene, and pushes the viewable set of scene nodes back into the tuple space. Meanwhile, the main process could be running the physics simulation, processing sound etc. This approach would require writing a separate program which works cooperatively and concurrently with the main program. No forking, and no threading.
Posted by Simon Wittber at Wednesday, September 20, 2006 1 comment:

If I had a Concurrent Python, what would I do with it?

This function takes care of starting, joining and collecting results from threads. It lets the programmer map a function over a sequence, and have the work done in parallel. Of course, this won't work in CPython, but it might prove useful in PyPy, or IronPython. Parallel processing in this style would be very useful for applications that work with large data sets, ie Games!

A game could be written to take advantage of the xmap function whenever possible. It would only make sense to use it when iterating over large data sets or using long running functions.

Concurrent Python on Win32? No Such Animal.

I want a cross platform, concurrent Python. It seems, I can't have it. I really am astounded by the fact that there is no way I can implement concurrent programs in Python on Win32, without resorting to socket communications between two different programs. A heinous kludge, from my perspective.

The second core on my new notebook will not be available for my Python games. Python used to be my secret weapon, when it came to game development.

I don't want to get left behind in the coming multi-core revolution. Maybe it's time to move on.
Posted by Simon Wittber at Wednesday, September 13, 2006 2 comments: 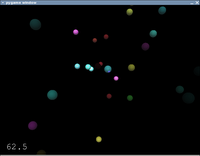 I've just uploaded QGL-8 to the python cheeseshop. This version contains the new shader funtionality, plus a very useful Static Node, which compiles all it's children into a single display list. The attached screenshot shows the new Material leaf class being used in a neat particle demo (contributed).
Posted by Simon Wittber at Monday, September 11, 2006 2 comments:

My Pyweek effort is over.

Perhaps next time.
Posted by Simon Wittber at Wednesday, September 06, 2006 No comments: