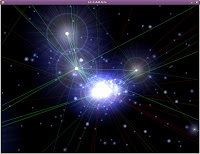 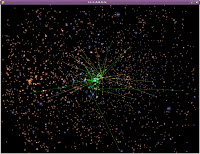 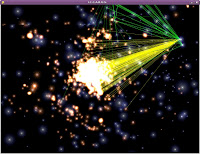 The ICCARUS (Interactive Command Console and Relational User Statistics) tool was launched at webjam this evening, and won first place via popular vote.

Some nervous moment were had, due to the Ubuntu laptop not playing nicely with the projector setup... a few minutes of xorg.conf hacking... and we were up and running... phew!

ICCARUS provides a three dimensional visualisation of the data behind scouta.com. It shows the social network between members, the memberships of scouta groups, and the links between members and the videos/podcasts which they enjoy.

The 'galaxy' can be navigated by clicking on points of interest, or searched using commands.

The really neat thing, is that the galaxy is not static. It can be dynamically reconfigured via custom constraint expressions, to show how the different node types cluster around items, groups and users. This provides instant visual feedback on the health and growth of the system and how people are using the system.

The data is fetched via web services provided by TurboGears, and uses an (as yet) unreleased version of the GFX library to create the visuals.
Posted by Simon Wittber at Wednesday, August 15, 2007

You totally deserved to win, Simon, ICCARUS is insanely cool. What I want to know is when will it be ready for us to play with it live on Scouta? It's some seriously hot visualisation - I love it!

I love how you've used your 3d skills for website visualisation.

Lachlan: Thanks for your (and Tim's!) Webjam efforts, it provided a lot of the motivation to build ICCARUS.

ICCARUS needs some tweaking before it is ready for public consumption... stay tuned! :)

Iccarus is awesome. Do you plan releasing the code?
I would love to try it for http://trustlet.org !